It’s all happening over there…

Any Miaow readers out there – if you are interested in following our adventures, there is a new blog over atBella Luna Boat – it was time to change direction – it’s a new chapter of our lives – and while we are boat dwellers and waterborne adventurers, bellalunaboat will be our online home 😘 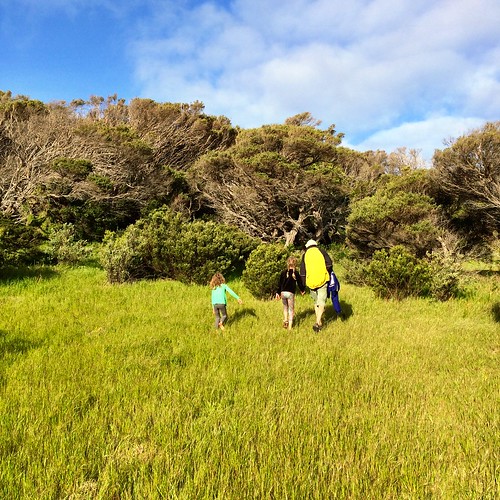 We left Hastings at just before 8am on Wednesday morning – after days of strong wind warnings tied up to the pier, it was our window of opportunity. It was initially straightforward, the closer we got to the mouth of Westernport, the bigger the swell got – it was like being on a rollercoaster – the Smalls loved it…

We were heading to Refuge Cove at Wilson’s Promontory. A big sail. I could write with more detail, but as I have to hike up a mountain in a few minutes to reassure the world that we are, in fact, alive, I will summarise as follows:

To provide a polite understatement, the journey was not pleasant. The beginning was fine. The last 90 minutes was sublime – we sailed into the blessedly calmer waters of the cove under the light of a (nearly) full moon. I had been sleeping on and off while M, in his element (putting in a 20 hour day) steered through the blackness of Bass Strait. He called me into the cockpit at about midnight.
“Check that out!” He was pointing to something that looked like a cross between a navigation marker and an oil rig – with an unearthly orange glow….
“Yikes!” I said. “Is that on the chart?”
“Look closer…”
“Oh my gosh!! It’s the MOON!”

The moon was heaving up over the horizon – a huge orange beach ball peaching out of the black. Everything felt more friendly as it rose high enough to light our way…

Finally, after anchoring very carefully (thank you M nerding over screenshots taken from Google maps), it was time for bed. The Smalls had been stuffed into one of the big beds so I knew they were both together – we’d had to motor for over five hours because of waning winds, and they had both been lulled to sleep quite easily… I elected to go in DB’s bunk with a hot water bottle to revive the feet I had not felt for many hours. M headed off to his bed, and emerged in front of me like a morose shadow a few minutes later. One of the front hatches had been open and water had soaked his bed right through.

He had captained us so valiantly through the seas – I gave him the bunk I had just finished warming, and crawled in between the slumbering Smalls.

We slept, awakening four or five hours later to a completely different outlook. Blue waters, eucalyptus trees growing down to the beach and a cover lined by huge rocks and yellow beach. It was beautiful….

We are in Wonthaggi – a place that is very similar to Hastings, but windier, somewhat more picturesque, and better laid out. Our friends gave us their house for a couple of nights while they are away and we are WALKING TO THE LIBRARY and the SUPERMARKET and generally revelling in spreading ourselves around the house. The Smalls are watching ‘Mr Bean’ and I’m baking strawberry rhubarb muffins. And eating them. With cups of tea. Doing so much housesitting this past year or so has opened my eyes to the generosity of others. To their flexibility, trust and acceptance. Would I have disappeared for the weekend in our Hastings home and told someone to hang out and use whatever they needed? I would like to think so – but there is part of me that thinks maybe not – back then when I had too much stuff and was more uptight about it.

Things change. I have changed. Next time we are in a real, proper abode (i.e. not a boat) I hope to have a lot of books, a lot of plants and minimal everything else – except for tea – I will probably have lots of that. I intend to do some karmic payback and embrace some housesitters or people that might enjoy a weekend with a dishwasher, washing machine and hot running water (just as I currently am). After roughing it for a while, these things are incredibly soothing and very much appreciated… This morning the Smalls and I went to one of my favourite markets – one I haven’t been to for far too long. And it was so close to where we are staying!! I love you, Kongwak. With all the modern conveniences it is easy to just stay inside and hang about. I got us out of the house for a walk this afternoon. Small DB, as usual, needed some persuasion, but was happy to act as ‘Direction Finding Daisy’ once we got underway…. I like to walk around, down all the old laneways that sever the blocks of houses – remnants of the time when there was no sewerage system, I imagine. Half of me can imagine living here – it is similar to Hastings when we first moved there. Lots of the old blocks of land are being subdivided, but there are more that have not – still with their old houses and backyards that go on forever. If it wasn’t for the wind…and I do not exaggerate – there is actually a wind farm here!

We made it through the latest bout of wintery weather with relations largely intact 😉 We are scrambling toward a self-imposed deadline that we are desperate to meet. Thus, the Smalls are being treated with what can only be described as ‘benign neglect’ – the two words of advice that my boss gave me as a new parent many moons ago. It is still unknown where the Humber will live and what will become of Manny the Mercedes. I have offers from several people to own, or babysit the latter. I’m just not sure whether (weather permitting) our deadline will be met. What the weather will be doing. More than a week ahead, at this point, is an unknown. Things have begun to feel a little bit exciting. Getting the antifoul on was a psychological boost – it makes Bellaluna look more seaworthy. I have been musing on coming to the end of my employment as medical file writer/editor/assembler. I will miss my time in the office – I love the people that I work with, and for. I have been there for ten years – they have been there while I have had life-altering events change my landscape. Half of me wants to stay, and the other half knows it needs to go and make a go of a new adventure.