Daphne. The second coming; and going. 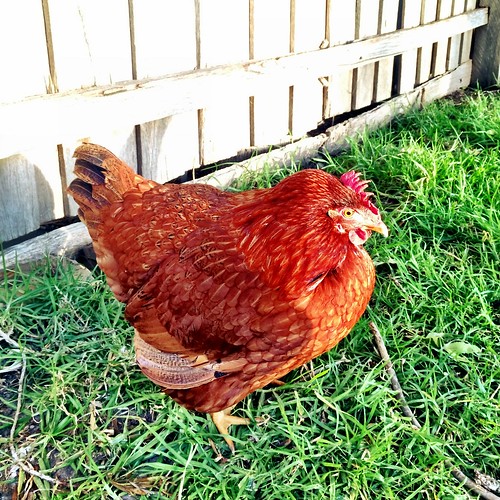 Daphne the Chicken has been poorly for about three weeks. That photo was taken two days ago. She has been hanging back, not eating much, looking lethargic. Last week I took her to the vet. As someone whose only past experience in sick animals is cats, I found it quite disconcerting that I could not interpret Chicken. It was impossible to tell what was wrong with her. I called my friend and chook goddess, Jackie.

“Hmmm.” she said. “You could take her to the vet. But they’d probably charge you $70 and tell you you’ve got a sick chook…”

I couldn’t NOT take her. What if there was an easy fix? What if she was egg bound, and the unbounding of the egg turned her back into her normal and demure self?

“Everyone thinks their chooks are egg bound,” confessed the dreadlocked vet. “But they hardly ever are. Daphne’s not egg bound.”

She spoke about the short lives of chickens, their breeding for egg production rather than years of free ranging happiness. “Basically,” she said, “After about three years, it’s anyones bet. Could be anything. Try some antibiotics. It could go either way.”

Sixty-five dollars later, I still had a sick chook. I spoke at length to the Smalls, explaining that Daphne might not make it. The vet had told them she might need to be put down if she did not get better.

“It means that if Daphne is not going to get better and she’s feeling really horrible, it is better to help her die by giving her an anaesthetic.”

“But,” said Small Z, ever practical, “that will just send her to sleep.”

“We would give her an anaesthetic to put her to sleep. And then we would give her some more so she never wakes up. Her body would stop working. It stops her suffering. It’s a kind thing to do.”

We took Daphne home in her cardboard box. We gave her the medicine, intermingled with bread and fresh corn. She didn’t improve.

Today, four days later, I spoke to M before I left for work and asked how Daphne was when he had let the chooks out before breakfast.

“She’s there. She said a little hello to me. But she won’t come out of the chook home.”

I called him from work a few hours later. Daphne was dead.

“Do you want me to wait until you get home to bury her?”

“No. Just do it near the compost heap. Explain to the Smalls. I have worded them up that this might happen.”

[Do I ever turn down an opportunity to offer solicited advice? Rarely.]

“Draw a map with them, starting with an Egg, then a chooky and its lovely life – eating worms, laying eggs – and then being buried near the compost and becoming food for the worms who are food for the chooks that are left, helping more eggs to grow.”

An hour or two later I saw a message on my phone. Small Z had left a voice message that had been turned into text:

Mama – DAPHNE IS ALIVE. NOT DEAD.

I speed dialled the home telephone.

“Small Z, what did you say in your message?!”

“Mama, we patted Daphne…and she OPENED HER EYE!! Can we still keep giving her medicine? She’s not dead!”

“What! Please put Dadda on the phone.”

“ARE YOU SHITTING ME? Daphne is alive? You reincarnated her? What the hell is going on there?”

“Um. Well. The Smalls were just giving her a little goodbye pat each, and yeah…um…she opened her eyes.”

“No! No!! I mean we’d dug the hole and everything. But she was still in the chook home…”

“Are you seriously saying that you primed them both… gently gave them all the information about coping with death and how everything is a cycle, dug a hole, said goodbye… AND SHE WASN’T EVEN DEAD?”

“So now they believe in the supernatural. Nice one.”

I got off the train this evening and saw that Small Z had left another message.

She’s not alive. Definitely not alive any more. We’ve buried her. Bye Mama.

When I got home, it was confirmed. Really.

RIP Daphne – you are stardust… 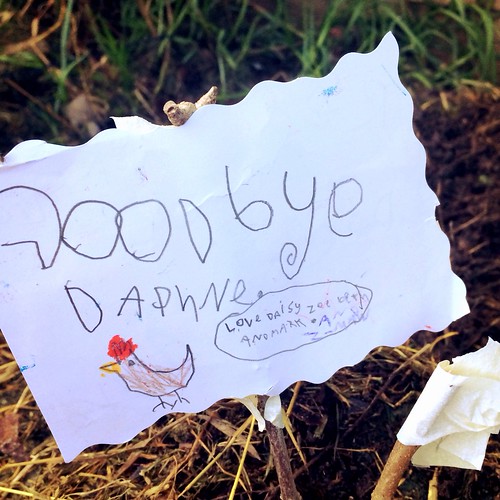 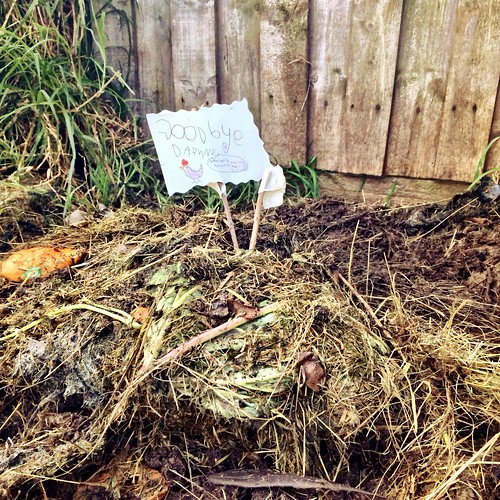 Guests of the best.

State of Decay. Mother of the Year.