Her own adventure – 3yo kindergarten

Small DB woke up with a buzz of excitement and a smile that did not stop. She missed her first day at kindergarten last week, but I never told her, so today was her ‘first day’. She was a different kid – ate her breakfast, willingly got dressed into something that was not a flowery dress and was standing ready by the gate with her backpack on while everyone else (me) was still getting ready. 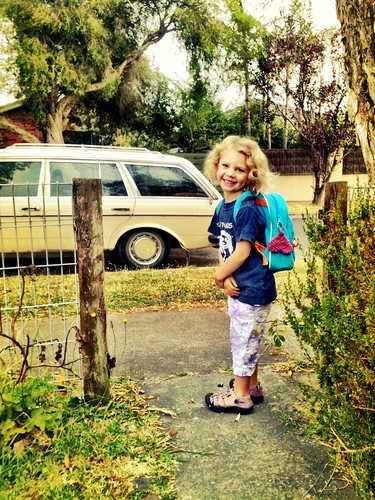 I belatedly realised that this was one of the first thing she has ever down ON HER OWN!. It was her own gig, and she wanted to jump in with both feet. She was ready in more ways than one. While she was waiting she renamed the family for the day (she’s kind of quirky like that). I became ‘SilkPot’, Small Z was ‘Mizzarky’, she named herself ‘Spotplant’, and M became (kind of hysterically) ‘Tomato’. Yes – it’s actually a photo with me in it! (Thank you, M!) Small Z and I walked her down to the kindergarten, took her inside, hung out with her for about ten minutes. Her best little three-year-old friend arrived. She seemed happy for us to leave her there. So we did. There was no heartache involved. She was confident, but a little bit shy.

Small Z and I headed off to the library and The Local cafe for a little bit of much needed one-one-one time. The kindergarten session was only two hours long and we were almost late back to pick up Small DB – we ran all the way! She was very happy to see us! We were told about singing ‘Dingly Dangly Scarecrow with a Flippy Floppy Hat’, story time, her snack, going to the toilet on her own… She was so pleased with herself. 🙂

It is, of course, hard not to make comparisons with what the experience was like with Small Z – they are both so different (such a stupid but unavoidable statement of the bleeding obvious). But reading back on what Small Z’s experience was like (thank-you, Interweb) – they are not dissimilar! One of my fervent hopes was to not have children that were shackled by their shyness, like I was, and I think we’re doing OK in that regard. Dadda Day: Out to Play